TL:DR – our API is now fully-featured and awesome!

Thirteen might be an unlucky number for some, but not if you’ve been planning on using our API as we’ve just released some major new updates to our REST-based SERPS API, so you’re now able to use it to parse any SERPS in almost every conceivable way. Here’s a complete breakdown of the new features available in the JSON response:

Plus you now have the option to get a copy of the complete HTML of the SERP to conduct your own analysis.

Want to see which of your competitors are spending money on paid campaigns and which ones are ranking in those coveted top positions? Well now you can carry out this analysis, using the API. For those of you who want to track all PPC ads appearing in the SERPS, then you’ll be pleased to hear that we also show you the details for the ads that Google puts towards the bottom of the page. You’ll notice that we simply differentiate between the two through the use of an “on_top” property:

If you’re developing a PPC campaign management platform or just building an SEM dashboard and need both PPC and SEO data, then hopefully you should find this update useful.

AMP (Accelerated Mobile Pages) are a reflection of Google catering for the fact that most searches online are now carried out using mobile devices (phones, tablets, etc). Usually, you will only see these types of results for mobile searches. Therefore you would need to specify a mobile user agent in your API request. To read more about AMP pages, read this article on searchengineland.com.

Google has been providing ‘direct answers’ to queries in various forms for some time now and often in such an informative way that the answer presented initially at the top of the SERPs is sufficient to answer the initial question, so a user doesn’t always have to then navigate to a particular website. These types of result come in several forms, but amongst the most common is the ‘list’ type, which will either show as an ordered (numbered) or unordered (bulleted) list. Here’s an example of the former: 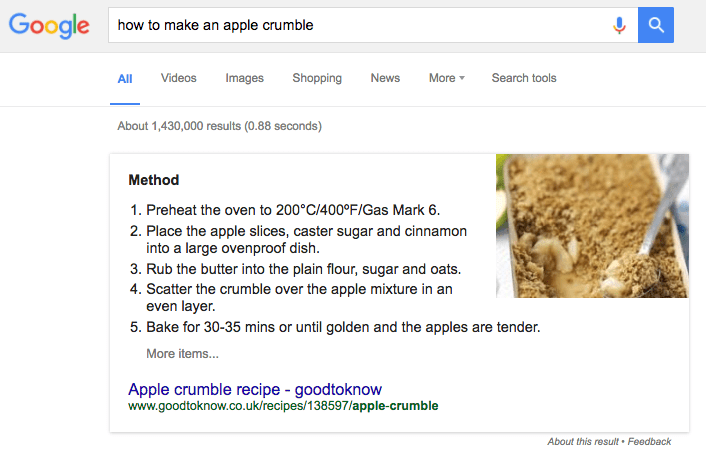 And here’s an example of the bulleted type (yes, it does seem that some people even need Google to tell them how to do this!): 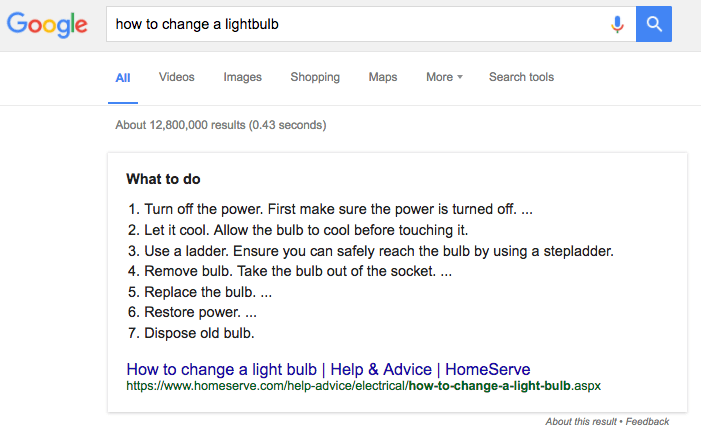 For some queries, however, Google will return a direct answer that looks awfully like a paragraph and this is sometimes the case even if the linked content is actually displayed as a list. This will show as “type” => “paragraph” in the JSON response. 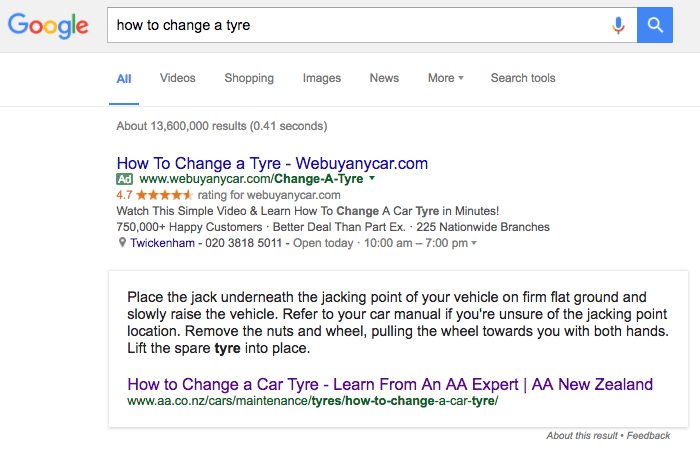 For some direct answer results, you’ll see what is obviously a table at the top of the SERPS. These can vary slightly from query to query, as you can see from the following examples: 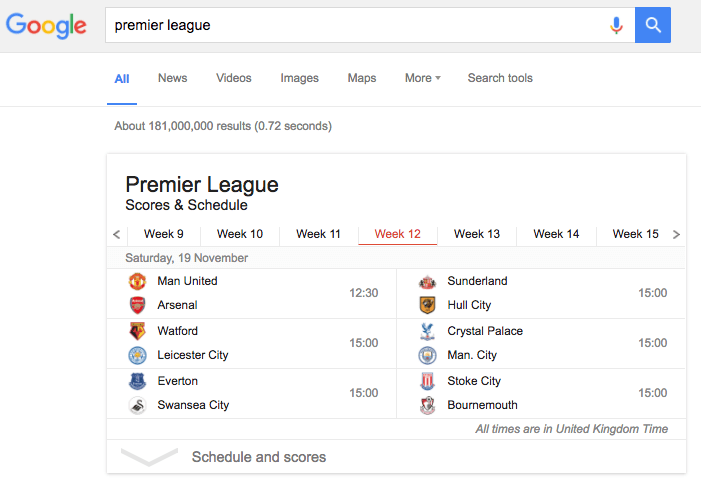 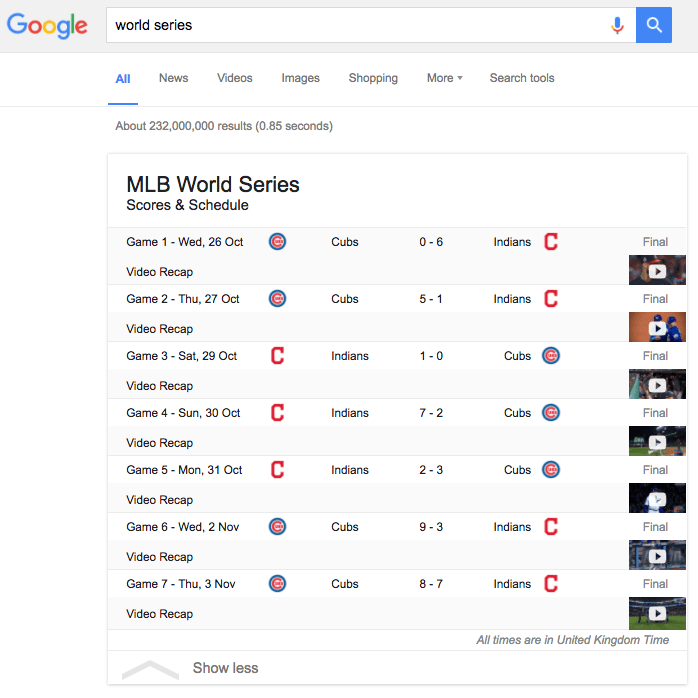 The API has been picking up on normal video results for a while now, but Google will occasionally highlight the most relevant video result as a featured video at the top of the results page. You typically only see this type of result on page 1 of the SERPS. Here’s an example: 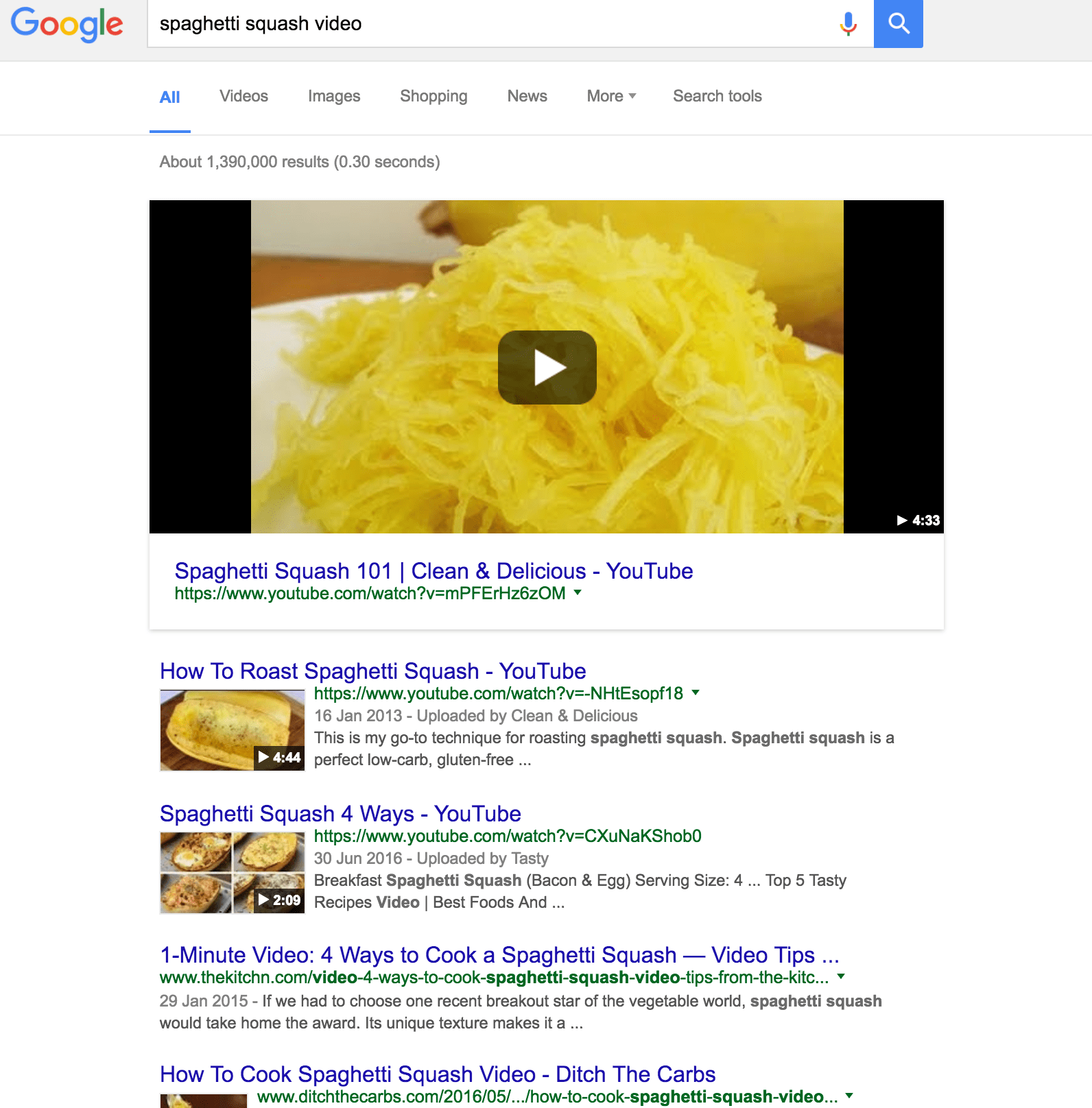 And here are the JSON response you’ll get from our API (not the “featured” property set to “true”):

Sometimes you’ll want to see the exact HTML Google returned to us, so we now include this as part of the JSON response, if you’ve included “debug” => true in your API request. You’ll then notice that the JSON response is much bigger than normal and that towards the top of it you’ll see the full HTML response is provided as part of it (the example below is only part of it): 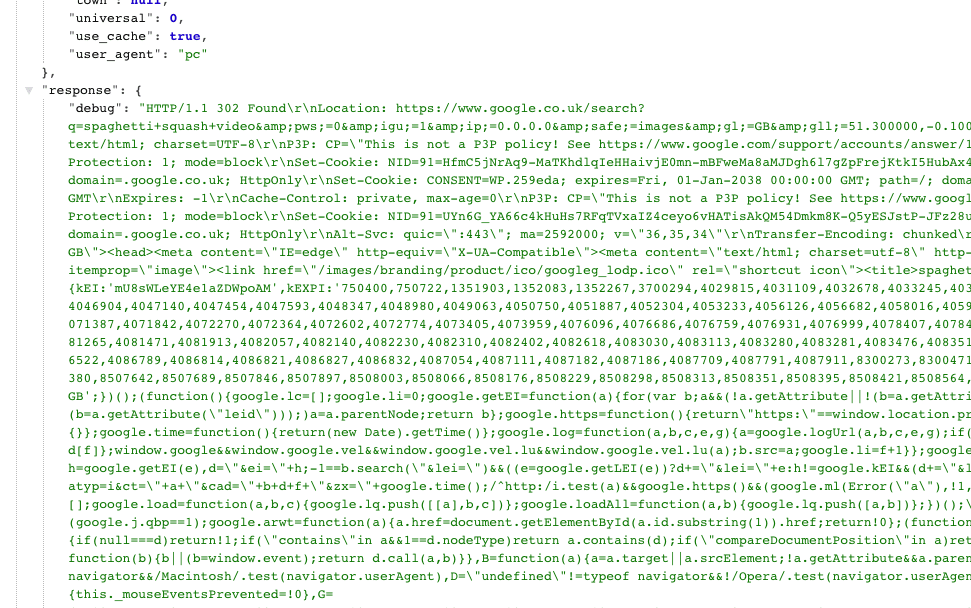 For some queries, Google will return a ‘knowledge panel’ or a ‘knowledge graph’ based result. This typically appears on the right hand side of the SERPS. Here’s a good example of that when just searching for ‘barack obama’: 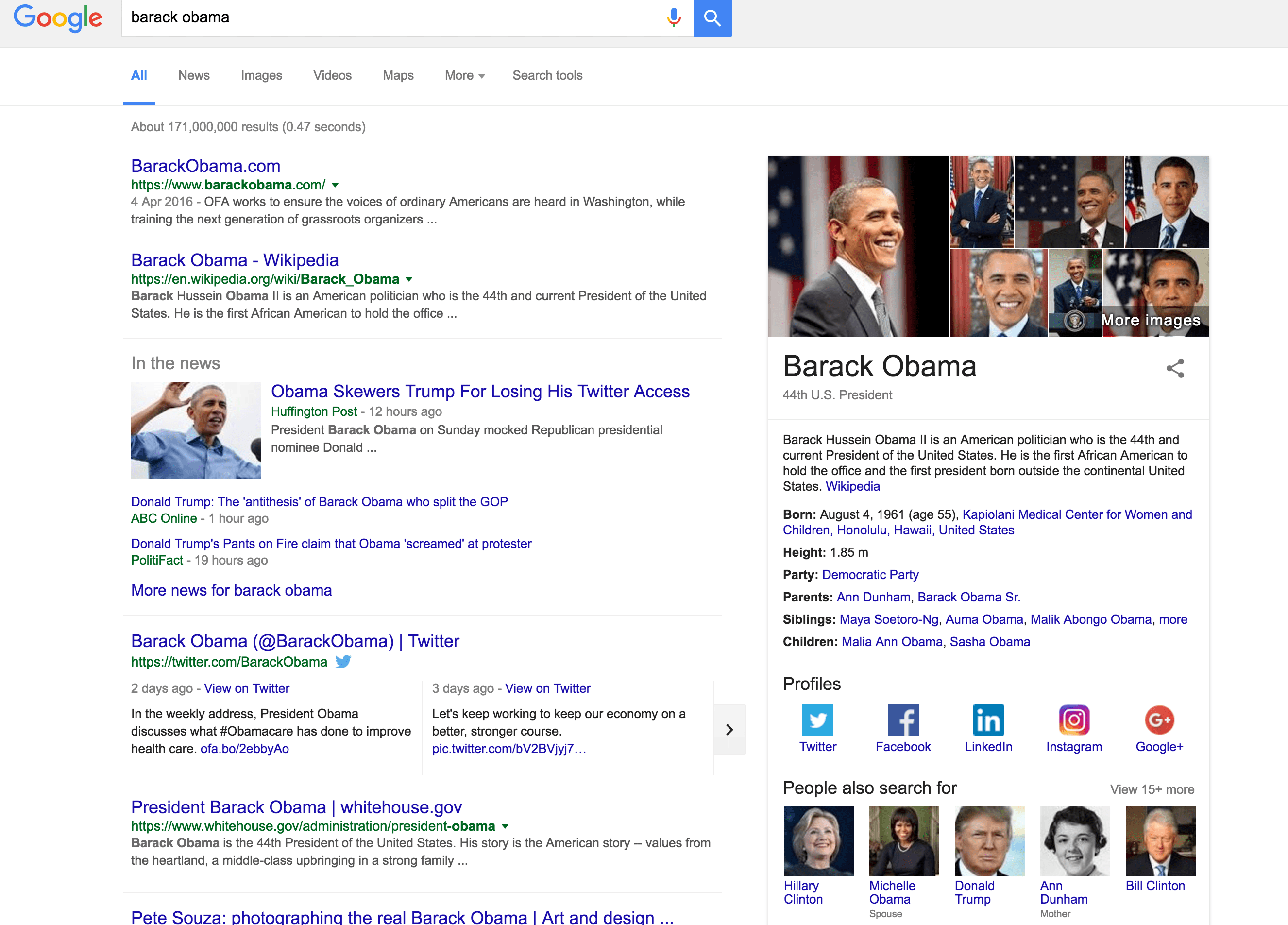 For some queries, Google will also display “related questions” other users made for similar queries: 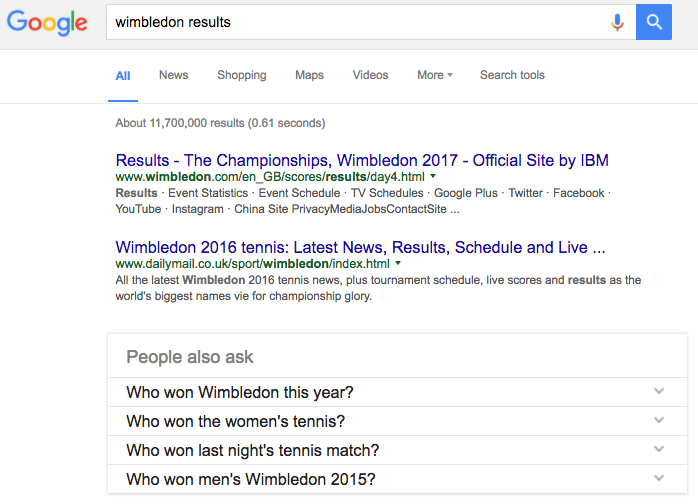 This section of the SERPs is often shown above the fold (on a desktop search anyway) and, just like “related searches” (below), gathering this information can be useful as part of your keyword research tasks when conducting an digital marketing campaign. You’ll see this broken in the JSON response under “people_also_ask: {}”.

Similar to the above “related questions” or “people also ask” results you see in Google, you will normally always see a “related searches” section towards the bottom of the SERPs, just above the pagination section. You can also use this data as a useful addition to any Keyword Research you are carrying out during a campaign. The relevant part of the JSON response will look like this: 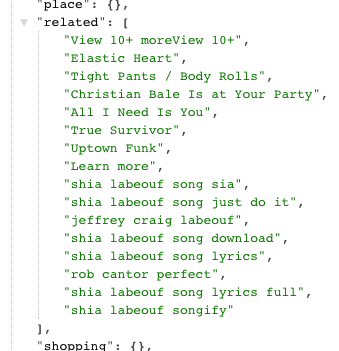 Google will sometimes return tweets as part of the SERPS results, although this is more likely when a user is searching for something quite topical. A good way to see this in action is to use a Twitter hashtag when googling. Here is a recent example: 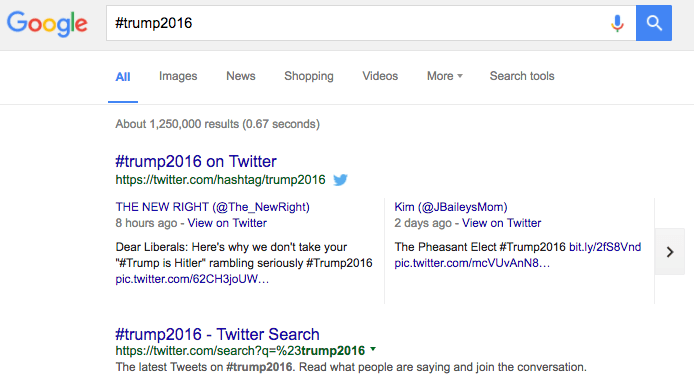 One of the effects of universal search results appearing in the SERPS was the effect it would have on a site’s overall ranking position. We reflected this concern in the platform by introducing a Universal Rank for each keyword, to go alongside an Organic Rank. The universal rank in the platform would take into account organic, video, image and news results in calculating an overall universal ranking position. However, now if you consider that paids ads (PPC) should also be included in this overall calculation, then you can specify this in your API request by simply using ‘include_all_in_universal’ => true’ in your request object: 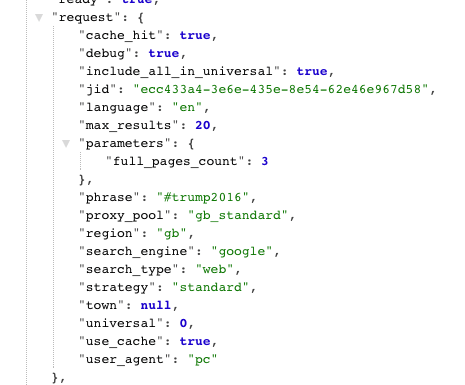 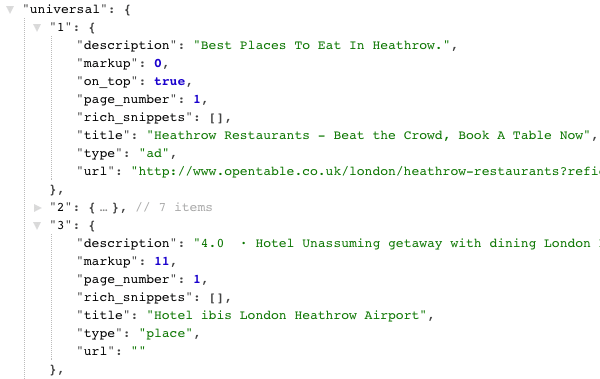 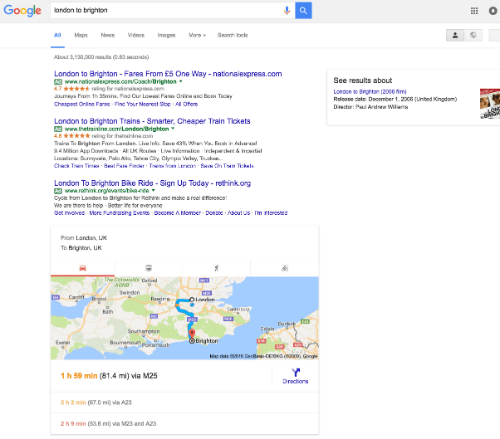 This is a relatively recent addition to the SERPS by Google and is a good example of how Google is trying to provide its users with quick and detailed answers. Obviously, this data originates from and links to Google Maps.

WANT TO TRY IT OUT?

Excited by all the possible ways in which you could use all this data? Well, if you work for a digital marketing agency, a corporation, enterprise or a single e-commerce site and want to try this out, simply get in touch with us and we’ll send you a free API key for a limited period.